Review: In the Shadow of Blackbirds by Cat Winters

"They've closed down the city to try to keep the flue from spreading. They quarantined the soldiers sooner than the rest of us, but now it's the churches, theaters, moving picture houses, bathhouses,and dance halls—all closed."
"Schools?" I asked with hope in my heart.
"Closed." (15)
The year is 1918, World War I is raging, and the Spanish influenza is spreading rapidly claiming the lives of men, women, and children without prejudice. During the midst of this harrowing time, sixteen-year old Mary Shelley Black's life is turned upside down. She finds herself on a germ-packed train fleeing her beloved Oregon home—the only home she's ever known—to her aunt in San Diego, California after her German father is accused and arrested for treason. Mary Shelley arrives in San Diego to discover her young, widowed aunt working in a shipyard, her sweetheart dead, and her image used to entice grieving individuals to spirit photography by her love's unscrupulous brother. Being a young lady of science, Mary Shelly is skeptical of the spirit world, but will her position shift when she's thrust into its mystical wonders.

Before reading this book, I knew nothing about the Spanish Influenza pandemic. As a result, I learned much throughout the reading. Winters' sensory evocative writing along with the haunting photographs of the era, truly brought the time period to life. Visualizing the black, grey, and white crepes adorning doorway after doorway around the country, I understood the desperation of people flocking to spirit photography to gain closure after the sudden death of a loved one.

From one of Mary Shelley's first comments, "If we get sick, we'll probably just get dumped off at the next stop." (3), I knew we would become fast friends. There were times when she annoyed me, but I enjoyed her frankness, honesty, wit, and uniqueness. Other draws were her spunky spirit, self-advocacy, and excitement for learning. Her elementary explanation of how the war started tickled me. Besides my fondness for Mary Shelley, Winters weaves a captivating story of fear, sickness, sorrow, love, and loss that I was further drawn into the story. I liked how Mary Shelley and Stephen's relationship blossomed over the years from friendship to romance. Mary Shelley's tenacity and dedication to ferret out the truth of Stephen's death is commendable and a testament of their friendship turned love. My heart ached for them because they were unable to explore the depth of their newfound love. As a fan of Jane Eyre, I loved the nod to Thornfield Hall.
In the Shadow of Blackbirds was one of my favorite reads of 2013. Since present life chillingly mirrors life in 1918, I recently reread this book. I enjoyed it as much as I did the first time, if not more, since now I relate in a way I couldn't before the COVID-19 pandemic. In the Shadow of Blackbirds is a great addition to any classroom, personal, public, or school library.

Favorite Quotes
"I plodded after her in my own boots, knowing we made quite a pair—two young women, only ten years apart in age, whose femininity had become yet another casualty of war." (15)
"You read too many books that encourage the loss of innocence."
"I lost my innocence on April sixth, 1917. And it had nothing to do with Gray's Anatomy." (60)
"I ground my teeth and clenched my fists and felt as though Death himself were riding along next us us, taunting us. He was a nasty schoolyard thug, bullying us with a killer flu when we were already worrying about a war, flaunting the fact that we couldn't do a thing about the disease." (61)
"We have a great deal of fight inside us, and sometimes our strength of spirit forces us to choose truth and integrity over comfort and security."
"Just remember human beings have always managed to find the greatest strength within themselves during the darkest hours. When faced with the worst horrors the world has to offer, a person either cracks and succumbs to the ugliness, or they salvage the inner core of who they are and fight to right wrongs." (111)
"Make sure you truly know people before you offer them your trust. There are monsters lurking everywhere, it seems, and they sometimes disguise themselves as friends, neighbors, and patriots." (173)
If you enjoyed In the Shadow of Blackbirds, I recommend
A Death-Struck Year by Makii Lucier. 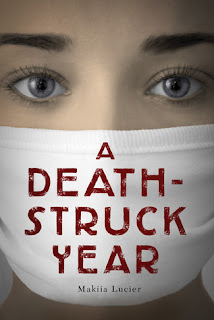 **All quotes were checked against the published book for accuracy.**
Posted by Written Melodies at 10:25 AM

I love comments! Please share your thoughts with me.

Okay, yes, I am one of those people, sort of. When I first started this blog, if I started a book, I had to finish it even if I disliked it because I detested starting a book and not finishing it; however, life shifts and brings change. I'm learning to follow the "too many books, too little time to waste reading bad books" credence of many book enthusiasts. That said, I still finish way too many disliked books than I should, but I'm getting better.
Updated: 4/3/19

Enter your email address to follow this blog by email.

Don't Bother-Books not to expend time or energy on.

Decent-Books that neither excite nor bore.

Worthy-Books that are a good escape.

Striking-Books that draw, capture, and suck you in.

OMG (Oh My Greatness)-Reserved for books that are extraordinary. Basically, a Must Read.

Crescent Moon-Designated for books that do not fall neatly into one of the above categorical ratings. (i.e. Decent + 🌙🌙🌙)

The $100 Startup: Reinvent the Way You Make a Living, Do What You Love, and Create a New Future
by Chris Guillebeau
tagged: currently-reading