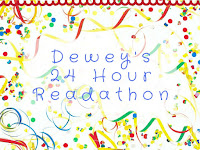 Dewey's 24-Hour Read-A-Thon is a bi-annual event and is held in April and October. I participated in my first RaT last April and I'm so excited to be doing it again this year. I will be updating this post throughout the day with my reading progress.

Today's Reading Pile:
Read more »
Posted by Written Melodies at 8:13 AM No comments:

Goodreads Summary: Three plantations. Two wishes. One ancient curse.
All her life, Barrie Watson had been a virtual prisoner in the house where she lived with her shut-in mother. When her mother dies, Barrie promises to put some mileage on her stiletto heels. But she finds a new kind of prison at her aunt’s South Carolina plantation instead--a prison guarded by an ancient spirit who long ago cursed one of the three founding families of Watson Island and gave the others magical gifts that became compulsions.

Stuck with the ghosts of a generations-old feud and hunted by forces she cannot see, Barrie must find a way to break free of the family legacy. With the help of sun-kissed Eight Beaufort, who knows what Barrie wants before she knows herself, the last Watson heir starts to unravel her family's twisted secrets. What she finds is dangerous: a love she never expected, a river that turns to fire at midnight, a gorgeous cousin who isn’t what she seems, and very real enemies who want both Eight and Barrie dead.

Read more »
Posted by Written Melodies at 5:31 PM No comments:

Okay, yes, I am one of those people, sort of. When I first started this blog, if I started a book, I had to finish it even if I disliked it because I detested starting a book and not finishing it; however, life shifts and brings change. I'm learning to follow the "too many books, too little time to waste reading bad books" credence of many book enthusiasts. That said, I still finish way too many disliked books than I should, but I'm getting better.
Updated: 4/3/19

Enter your email address to follow this blog by email.

Don't Bother-Books not to expend time or energy on.

Decent-Books that neither excite nor bore.

Worthy-Books that are a good escape.

Striking-Books that draw, capture, and suck you in.

OMG (Oh My Greatness)-Reserved for books that are extraordinary. Basically, a Must Read.

Crescent Moon-Designated for books that do not fall neatly into one of the above categorical ratings. (i.e. Decent + 🌙🌙🌙)

The $100 Startup: Reinvent the Way You Make a Living, Do What You Love, and Create a New Future
by Chris Guillebeau
tagged: currently-reading